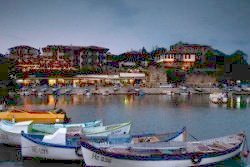 The Municipality of Nessebar has planned a new surprise for its citizens, tourists and guests for summer 2015. Another festival will be part of the various summer culture programme – the First International Festival – ‘’Nessebar – the Island of Arts’’. This event will take place for the first time and it is expected to be of immense interest, the press center of the municipality informed local media.

The First International Festival – ‘’Nessebar – the Island of Arts’’ will include a multitude of ensembles, unions of artists, choirs, groups and performers from all the parts from the country and from abroad, as well. Children and youngsters from the whole world can also take part in the festival and they will be given the opportunity to show their talents and qualities. The Municipality of Nessebar and the Nessebar Municipal Children’s Complex organize this contest. The cultural event will take place from 2nd to 7th July annually.

Working with Kunka (Kiki) was like working with my best friend. She wasn\'t pushy and when I asked her questions she was honest. Kunka was more for finding my dream home than make a quick sale. I will always recommend Kunka Boneva to people looking for an agent